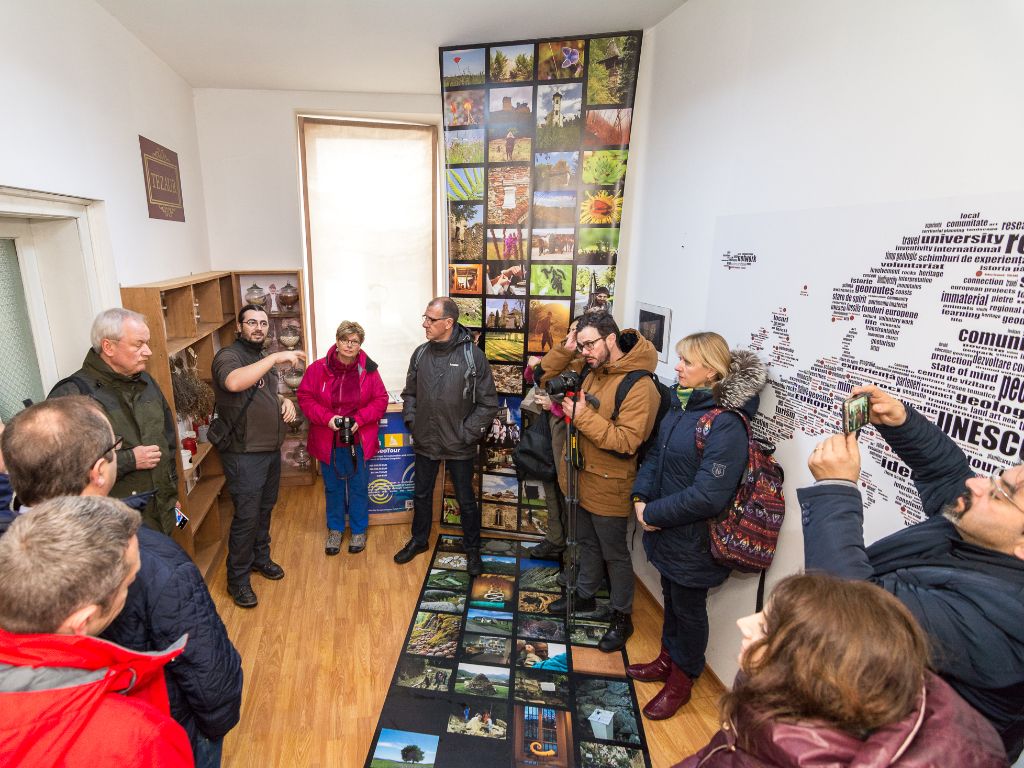 House of the Geopark

We recommend it as a starting point for the Journey Through Time in the Geopark.

Located in the town of Hațeg, 9A Libertății Str., the House of the Geopark serves as headquarters for the UNESCO Global Geopark – University of Bucharest, as well as the permanent exhibit ”Balaurs, dragons, dinosaurs”.

The concept builds on the legends of the balaur, the myth of the dragons and the fascination of the dinosaurs. The exhibition star is Balaur bondoc,  a species of dinosaur that lived about 70 million years ago on the former Island of Hațeg. He has many stories to share with the visitors! From his discovery by a team of four Romanian and American paleontologists, to the way it received a shape thanks to the Canadian skillful paleoartists, Brian Cooley and Marry Ann Wilson. The two Canadians are the ones who recreated Zalmoxes robustus, another dinosaur that lived on the former Island of Hațeg and keeps company to Balaur bondoc in the exhibition at the House of Geopark. Also here you can find rocks, minerals and fossils, and a nest of genuine dinosaur eggs, from the Late Cretaceous.

Organized groups can make reservations for any day of the year by announcing the visit at least three days in advance to the phone numbers:

This website uses cookies to improve your experience while you navigate through the website. Out of these, the cookies that are categorized as necessary are stored on your browser as they are essential for the working of basic functionalities of the website. We also use third-party cookies that help us analyze and understand how you use this website. These cookies will be stored in your browser only with your consent. You also have the option to opt-out of these cookies. But opting out of some of these cookies may affect your browsing experience.
Necessary Întotdeauna activate
Necessary cookies are absolutely essential for the website to function properly. These cookies ensure basic functionalities and security features of the website, anonymously.
Functional
Functional cookies help to perform certain functionalities like sharing the content of the website on social media platforms, collect feedbacks, and other third-party features.
Performance
Performance cookies are used to understand and analyze the key performance indexes of the website which helps in delivering a better user experience for the visitors.
Analytics
Analytical cookies are used to understand how visitors interact with the website. These cookies help provide information on metrics the number of visitors, bounce rate, traffic source, etc.
Advertisement
Advertisement cookies are used to provide visitors with relevant ads and marketing campaigns. These cookies track visitors across websites and collect information to provide customized ads.
Others
Other uncategorized cookies are those that are being analyzed and have not been classified into a category as yet.
SALVEAZĂ ȘI ACCEPTĂ